In Realm Grinder, Assistants auto-click passively once every second for 5% of your clicking reward and helps gather coins and Faction Coins. Depending on the upgrades and spells in use like upgraded Fairy Chanting, this income can potentially eclipse standard building production.

Attention! 'Assistants help passively' means that they do not really click, and do not affect your Productive or Automatic click statistics. They simply influence your income, proportional to clicking reward.

Cosmetically represented by different little creatures for each faction, they can be found in the task-bar, and based on the total count, up to six can also appear in a ring at the center of the background image (screenshot of a single assistant at the top of the ring) [Alternative needed]. Prestige factions will have their assistant icons will appear alongside the original faction's, but this has no effect on gameplay. Hovering over the icon will bring up the tooltip, above, listing the number of assistants and their total production.

You will get the first assistants[1] after the first and second building tier upgrades ( = 5th and 25th building of the each type), except for the Hall of Legends which give none.

Assistants can also be bought, or increased, through Upgrades, Faction (Undead, Demon, Fairy, and the neutral Faceless and Druid), the Heritage for the Undead faction, and the Assistant Squasher Secret Upgrade. After certain thresholds of Reincarnation, some are provided freely through Challenges, and later, others through Research upgrades.

Typically assistants accumulate over time; the longer the run (this game), especially the Undead Heritage and Druid Faction upgrades, and the higher the building count(s) for the Undead, Fairies (3,1), Demons, and Faceless regular Faction upgrades. 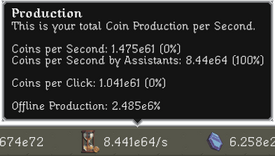 Having many assistants can be a powerful asset and can completely overshadow your actual production!

You can see the "Coin per Second per Assistant" in the Production tooltip by hovering over the sand clock icon on the left side of the taskbar.

The five affiliations above will specially take advantage of them, however out of the three vanilla factions, the most notable is the Fairy one due to the spell Fairy Chanting which once upgraded, triples their number; they also get access to Holy Light and Diamond Pickaxe (once prestiged). The Undead get them first with their second group of upgrades, but they are not particularly powerful and based on run length which is slow; the same goes for the power of the Demons[2]. Their saving grace is the Drow, which have incredibly strong upgrades for their assistants. By contrast for the Good-aligned Fairies and Elves, Dwarves previously got use out of the IGOT upgrade, but this has fallen out of favour as of 2018.

Of course with Mercenary combinations, cross faction upgrades will be an immense help. Assistants are usually buffed with Fairy Chanting again, and used alongside the Blacksmiths in "Forge" merc builds. Assistants provide a certain level of Faction Coins from clicking by themselves, but in merc builds this will be further augmented with either Diamond Pickaxe's chance multiplier for maximum effect, or Lightning Strike's direct FC gain as an auxiliary source.

Note that it can be painfully long to get the +300 assistants trophies before unlocking mercenaries.

Retrieved from "https://realm-grinder.fandom.com/wiki/Assistants?oldid=25226"
Community content is available under CC-BY-SA unless otherwise noted.