While Offline, your game continues to progress on its own, but at a slower rate than while online. In addition to the offline production bonus, the game can be setup to also generate automatic clicks and spell casts.

Offline Production bonuses were initially intended for an offline play-style, but as many other perks, it can be also used as a variable for other upgrades. (eg. the Undead challenge reward "Midnight Time", increases Night Time assistant bonus based on total time spent offline.)

Amongst the existing factions, the Undead and Drow are the ones to have the most offline related perks. The Drow Tier 3 challenge even enables to increase offline time while online. 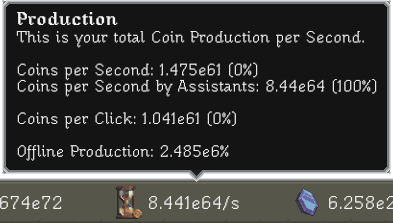 In opposition to Faction Coins, all Offline Production Bonuses are multiplicative. (eg. The 4 Offline Upgrades listed in the table below give 86300%.)

Many upgrades and researches include an offline effect in addition to their online effect. Listed here below are a few special and exclusive offline upgrades.

Retrieved from "https://realm-grinder.fandom.com/wiki/Offline_Production?oldid=22900"
Community content is available under CC-BY-SA unless otherwise noted.