The Scrying function enables you to gain an extra boost of your choice in exchange for viewing a video advertisement which will help Divine Games gain some revenue.

The ads you get are not dependant on Kongregate or Divine Games but on the ad company which provides the ads as a service to Divine Games.

The selection of ads and number of times you can scry depend on your geographical location. Each time you scry, the ad should be different and you shouldn't be seeing the same one too many times in a same session.

Your IP reveals the country where you are, and your cookies store a list of the ads you have viewed.

You can now claim your reward! 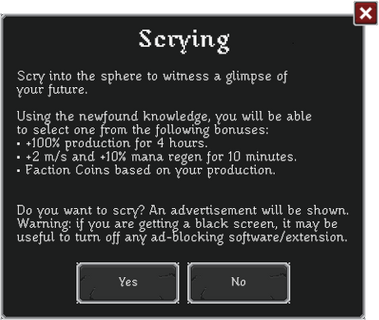 While viewing the video make sure to close the window after you see "You can now claim your reward!" Hovering over the video will make the video timer appear, showing you how long the ad will last. You can switch to an other tab and leave the ad running in the background.

If you happen to crash just before choosing your option, the game may react as if you have claimed it. This can be annoying if you live in a country with few ads, you might not be able to scry again for sometime.

The choices are as shown in the game window:

Events can bring additional options, such as (seen until now):

Hovering over the scry button, you may read:

If you have problems scrying:

Many have had problems and Divine Games has made a forum post for this: Go here to write a report.

Retrieved from "https://realm-grinder.fandom.com/wiki/Scry?oldid=10827"
Community content is available under CC-BY-SA unless otherwise noted.