Start a Wiki
In Realm Grinder, your game statistics, referred more commonly as Stats, are important. You will continuously need to check them to find out how much bonus certain upgrades bring or would bring, as much as to see how far you are from certain requirements for unlocking Trophies, Challenge perks or Research upgrades.

Some stats get reset at abdications, others at reincarnations, and some never. Some are represented 'live' and are updated every second as your game progresses. The little radio buttons at the top left enables to switch between 'This game' and the other timeframes.

The basic and most used ones are indicated as follows:

The followings are only used once:

The stats window is divided in four sections, and not all entries are affected by the 'This game', 'This Reincarnation', and 'All Time' options. 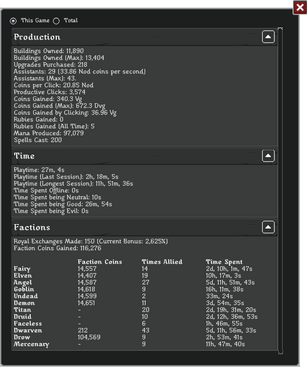 There are more hidden stats you can see using the Royal Scribe tool.

Retrieved from "https://realm-grinder.fandom.com/wiki/Stats?oldid=25190"
Community content is available under CC-BY-SA unless otherwise noted.